Warren County has a total land area of 217.86 square miles.  The rural part of the County contains 207.36 square miles and the Town of Front Royal covers 10.50 square miles.
Three factors in the County's regional setting have greatly influenced growth and development.  The first factor is its location in the Shenandoah Valley.  For more than a century, the Valley has been noted for its beautiful mountains and clear streams, and has attracted many tourists and seasonal guests.  Because of the ease of travel along its length, the Valley has been an important north-south transportation route since Indian times.

A second regional setting factor influencing growth is the County's location bordering two low passes over the Blue Ridge Mountains.  Much pioneer commerce from the Richmond and Hampton Roads areas passed through Chester and Manassas Gaps, across Warren County to distant markets.  The early retail and industrial sectors of the economy developed from trans-shipping of manufactured goods and agricultural produce through the County.
The third factor is the close proximity of Warren County to major cities.  The distance to Washington, D.C. is 70 miles; to Baltimore, 110 miles; and to Richmond, 135 miles.  These and other eastern cities have been major market places for County produce and products, as well as major suppliers of manufactured goods. 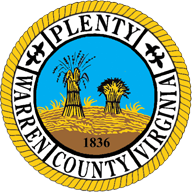